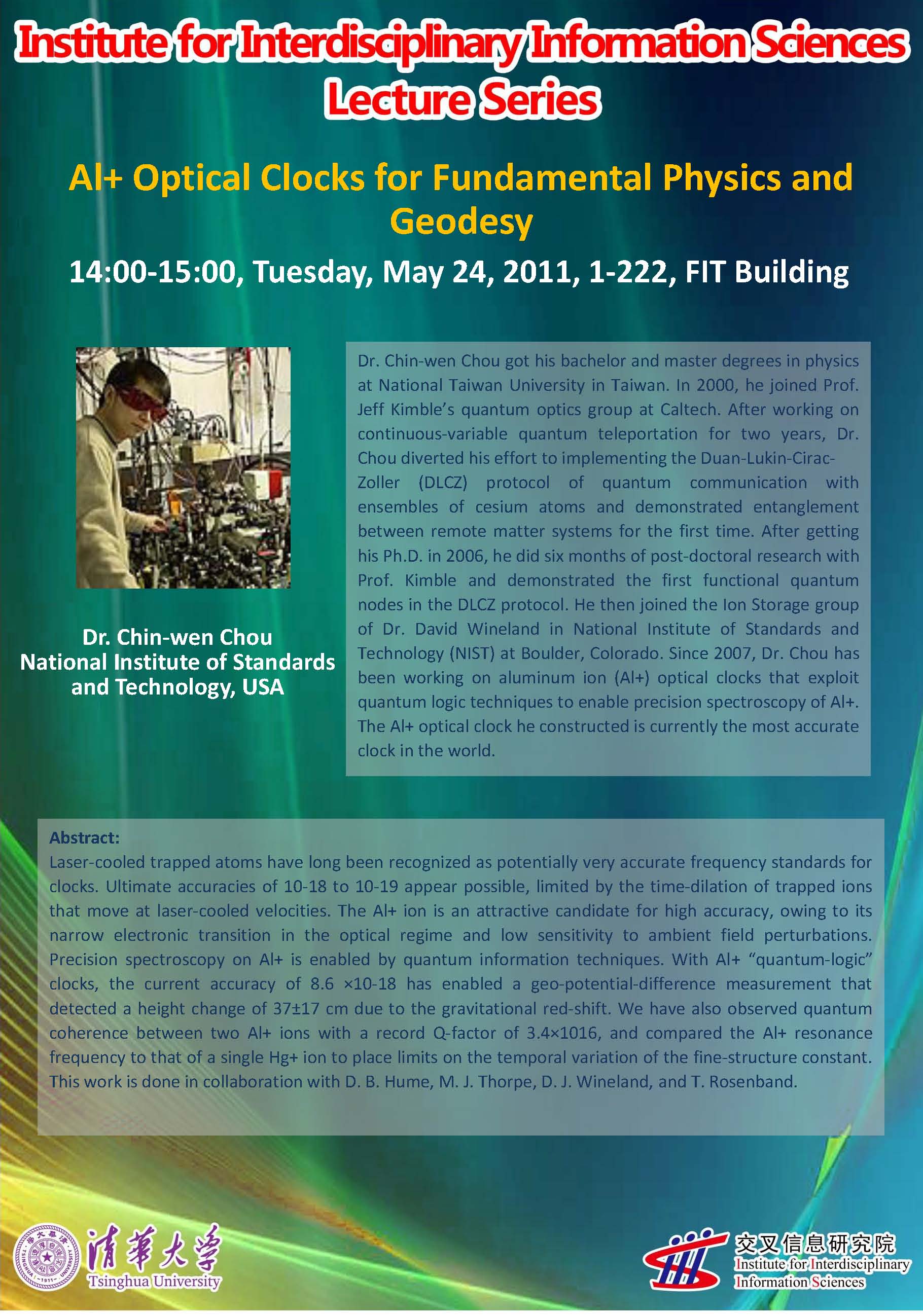 
Laser‐cooled trapped atoms have long been recognized as potentially very accurate frequency standards for clocks. Ultimate accuracies of 10‐18 to 10‐19 appear possible, limited by the time‐dilation of trapped ions that move at laser‐cooled velocities. The Al+ ion is an attractive candidate for high accuracy, owing to its narrow electronic transition in the optical regime and low sensitivity to ambient field perturbations. Precision spectroscopy on Al+ is enabled by quantum information techniques. With Al+ “quantum‐logic” clocks, the current accuracy of 8.6 ×10‐18 has enabled a geo‐potential‐difference measurement that detected a height change of 37±17 cm due to the gravitational red‐shift. We have also observed quantum coherence between two Al+ ions with a record Q‐factor of 3.4×1016, and compared the Al+ resonance frequency to that of a single Hg+ ion to place limits on the temporal variation of the fine‐structure constant. This work is done in collaboration with D. B. Hume, M. J. Thorpe, D. J. Wineland, and T. Rosenband.


Dr. Chin‐wen Chou got his bachelor and master degrees in physics at National Taiwan University in Taiwan. In 2000, he joined Prof. Jeff Kimble’s quantum optics group at Caltech. After working on continuous‐variable quantum teleportation for two years, Dr. Chou diverted his effort to implementing the Duan‐Lukin‐Cirac‐Zoller (DLCZ) protocol of quantum communication with ensembles of cesium atoms and demonstrated entanglement between remote matter systems for the first time. After getting his Ph.D. in 2006, he did six months of post‐doctoral research with Prof. Kimble and demonstrated the first functional quantum nodes in the DLCZ protocol. He then joined the Ion Storage group of Dr. David Wineland in National Institute of Standards and Technology (NIST) at Boulder, Colorado. Since 2007, Dr. Chou has been working on aluminum ion (Al+) optical clocks that exploit quantum logic techniques to enable precision spectroscopy of Al+. The Al+ optical clock he constructed is currently the most accurate clock in the world.