By Song Mengting from IIIS 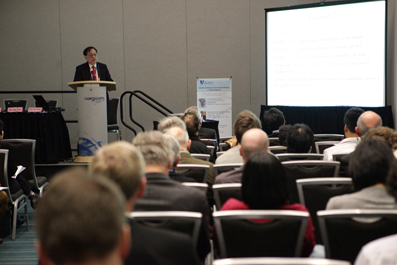 The 2012 AAAS Annual Meeting took place during 16-20 February in Vancouver, Canada. It is one of the most widely recognized pan-science events, with thousands of participants and broad global media coverage. The Center for Quantum Information (CQI) of Tsinghua University organized one of the symposiums entitled “Quantum Information Science and Technology: A Global Perspective”. Professor Charles Clark, Joint Quantum Institute of NIST and the University of Maryland and Professor Amy Yuexuan Wang, Deputy Dean of Interdisciplinary Information Sciences (IIIS) of Tsinghua University are chairs of the symposium. 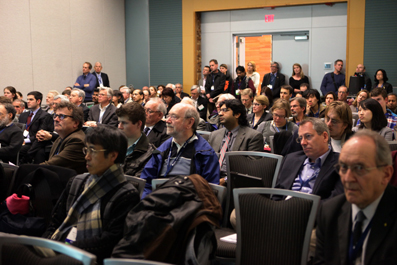 In her introductory remarks, Professor Amy Wang said Quantum Information Science is one of the greatest achievements of contemporary Science, joining the fundamental research on Quantum Mechanics with the Information Technology at the core of our everyday life. It engages a number of disciplines, including mathematics, computer science, physics, material science, chemistry, and biology in a new interdisciplinary effort. Like the Space Race has been the exciting enterprise of the 20th century, where mankind was striving to reach the skies, today we are witnessing a “Quantum Race”, where the world’s most brilliant minds are struggling to harness the power of the microscopic world and to create the new technology of the future. She said the symposium have invited five world-leading scientists, who are not only great scientists and founders of the new field, but also great communicators.

In his talk, Prof. Andrew Yao said that quantum information is not only a Great Science, but its interdisciplinary nature goes deeply into the subject. Computer scientists are working with physicists closely in this field. Prof. Yao introduced the development of quantum research in China, and the progress at CQI in particular.

At the discussion session chaired by Prof. Luming Duan, invited speakers shared their ideas on quantum network, quantum computer and other questions with the audience.

The Quantum Information Symposium attracted the great attention from media and was covered in Feb 25 edition of Economist.