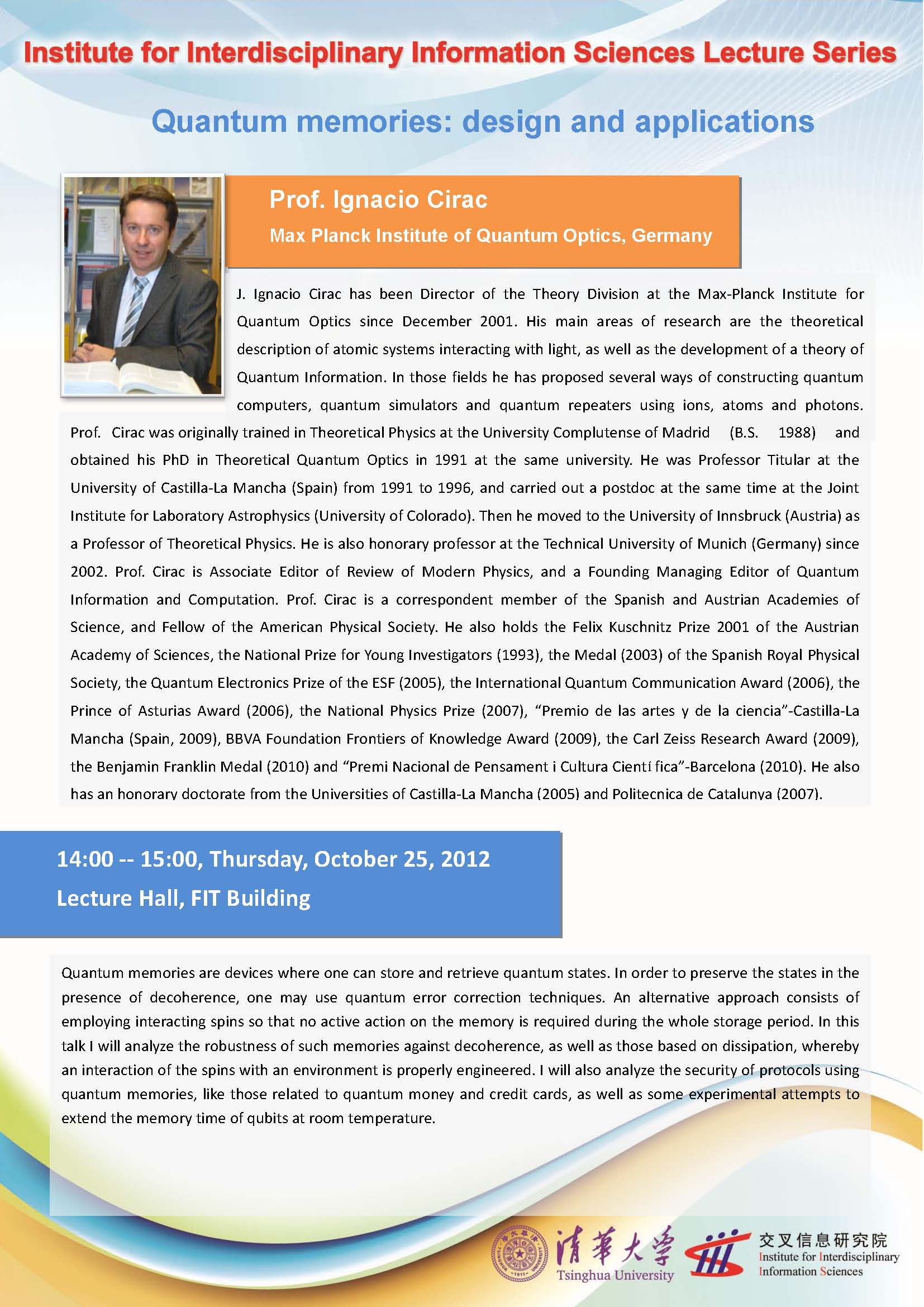 Quantum memories are devices where one can store and retrieve quantum states. In order to preserve the states in the presence of decoherence, one may use quantum error correction techniques. An alternative approach consists of employing interacting spins so that no active action on the memory is required during the whole storage period. In this talk I will analyze the robustness of such memories against decoherence, as well as those based on dissipation, whereby an interaction of the spins with an environment is properly engineered. I will also analyze the security of protocols using quantum memories, like those related to quantum money and credit cards, as well as some experimental attempts to extend the memory time of qubits at room temperature.

Short Bio:
J. Ignacio Cirac has been Director of the Theory Division at the Max-Planck Institute for Quantum Optics since December 2001. His main areas of research are the theoretical description of atomic
systems interacting with light, as well as the development of a theory of Quantum Information. In those fields he has proposed several ways of constructing quantum computers, quantum simulators and quantum repeaters using ions, atoms and photons. Prof. Cirac was originally trained in Theoretical Physics at the University Complutense of Madrid (B.S. 1988) and obtained his PhD in Theoretical Quantum Optics in 1991 at the same university. He was Professor Titular at the University of Castilla-La Mancha (Spain) from 1991 to 1996, and carried out a postdoc at the same time at the Joint Institute for Laboratory Astrophysics (University of Colorado). Then he moved to the University of Innsbruck (Austria) as a Professor of Theoretical Physics. He is also honorary professor at the Technical University of Munich (Germany) since 2002. Prof. Cirac is Associate Editor of Review of Modern Physics, and a Founding Managing Editor of Quantum Information and Computation. Prof. Cirac is a correspondent member of the Spanish and Austrian Academies of Science, and Fellow of the American Physical Society. He also holds the Felix Kuschnitz Prize 2001 of the Austrian Academy of Sciences, the National Prize for Young Investigators (1993), the Medal (2003) of the Spanish Royal Physical Society, the Quantum Electronics Prize of the ESF (2005), the International Quantum Communication Award (2006), the Prince of Asturias Award (2006), the National Physics Prize (2007), “Premio de las artes y de la ciencia” - Castilla-La Mancha (Spain, 2009), BBVA Foundation Frontiers of Knowledge Award (2009), the Carl Zeiss Research Award (2009), the Benjamin Franklin Medal (2010) and “Premi Nacional de Pensament i Cultura Científica” – Barcelona (2010). He also has an honorary doctorate from the Universities of Castilla-La Mancha (2005) and Politecnica de Catalunya (2007).