The ion-trap quantum computation research group led by Prof. Kihwan Kim in Center of Quantum Information (CQI), Institute for Interdisciplinary Information Sciences (IIIS), Tsinghua University, have recently successfully generated largest NOON-state type of entanglement with phonons of a trapped ion system. The work was published on Oct. 18, in Physical Review Letters, with the title of “NOON States of Nine Quantized Vibrations in Two Radial Modes of a Trapped Ion.” 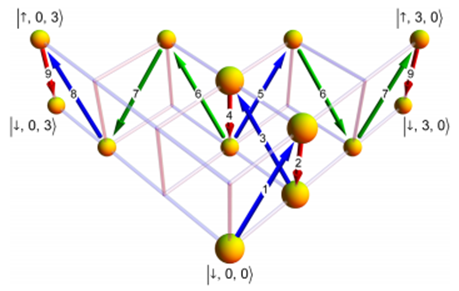 Figure 1 Generation sequence of the NOON state of N=3. The 3D grid describes the total Hilbert space of the system that consists of spin and X and Y vibrational modes. The lower and the upper layers represent

Figure 2 Parity oscillations of the generated NOON states N=1-9. (a) The blue dots are experimental data, and the red lines are fitting curves. (b) The time evolution of the blue-sideband transition of the output mode with φ=0 for the NOON state of N=7 and its fitting. (c) The corresponding phonon distribution

The corresponding authors of this paper are Prof. Kihwan Kim, associate professor of IIIS, Junhua Zhang, graduated doctoral student, and Mark Um, PhD candidate, with Zhang and Um as the co-authors.

Link of the paper