Prof. Kihwan Kim’s trapped ion group at Center of Quantum Information of Institute for Interdisciplinary Information Sciences realized a quantum simulation of a fundamental model in quantum field theory in a trapped ion system. The work was published in Nature Communications on Jan. 15th, 2018 which is entitled as “Experimental quantum simulation of fermion-antifermion scattering via boson exchange in a trapped ion.” 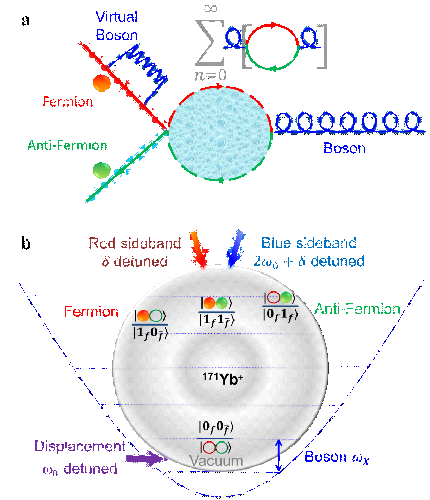 The field of quantum simulations with controllable quantum systems is rapidly developing and the time for a quantum simulator to outperform classical computational capacities does not look that far away. Such a quantum simulation device is expected to execute complicated computational tasks, such as involved computations in the frames of quantum field theory or quantum chemistry. Quantum field theories are among the most successful descriptions of the physical world from elementary particles to condensed matter systems. One of the most prominent approaches of analyzing the theories is to perturbatively expand the Dyson series using Feynman diagrams. However, certain regimes of theories cannot be studied in perturbation theory, where couplings are much stronger than the system energies for example. A quantum simulator, on the other hand, could be a powerful tool to simulate quantum field theories much more efficiently than classical computers.

In this paper, Prof. Kihwan Kim’s group experimentally demonstrates how a trapped ion system can simulate phenomena in quantum field theories, such as particle creation and annihilation or self-interaction processes. In their experiment, they perform a proof-of-principle quantum simulation of a fermion-antifermion scattering process mediated by bosonic modes. For the simulation they exploit the vibrational modes of the ion to encode the simulated bosonic modes, while they map the fermionic ones onto 4 of the electronic levels of the ion. This is the first time that a trapped ion system is used to simultaneously simulate bosons and fermions by profiting from the different degrees of freedom of the ion. Moreover, their approach is not restricted to perturbative regimes, as is the case in the standard classical or quantum computational approaches, instead they are able to observe the exact dynamics of the scattering process in highly non-perturbative regimes, something that would be cumbersome to compute even with dozens of qubits in a digital quantum computer. It is believed that their experiment opens the door to the digital-analog scalable quantum simulation of quantum field theories in perturbative and non-perturvative regimes. 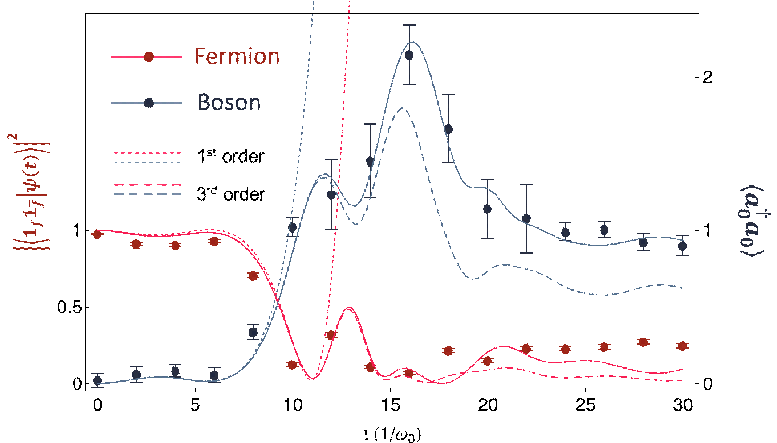 Figure 2 Trapped-ion simulation results of quantum field theories. . Fermion and antifermion annihilation process in the strong coupling, where both of self-interaction and pair production processes strongly influence on the dynamics.

The corresponding authors are an assistant research scientist, Jing-Ning Zhang, and tenured associate professor, Kihwan Kim. The equally contributed first authors are Zhang Xiang and Zhang Kuan who is  Ph. D candidate in IIIS and carried the experiments with Yangchao Shen and Shuaining Zhang. Zhang Xiang graduated from IIIS and is currently working mainly in Renmin University. The assistant research scientist Jing-Ning Zhang, Prof. Man-Hong Yung in Southern University of Science and Technology, and the team of Prof. Enrique Solano in University of the Basque Country, Dr. Julen Pedernales, Dr. Jorge Casanova, and Dr. Lucas Lamata provided the theoretical support. The research was funded by National Basic Research Program of China, and the National Natural Science Foundation of China.