The longest coherence time of a single qubit in the world by Prof. Kihwan Kim's Group

Prof. Kihwan Kim’s trapped ion group at Center of Quantum Information of Institute for Interdisciplinary Information Sciences realized a single-qubit memory with over 10 minutes coherence time, which is the longest coherence time for a single qubit, the basic unit of quantum information processing. The work was published in Nature Photonics on Sep. 25th, which is entitled as “Single-qubit quantum memory exceeding ten-minute coherence time.” Ye Wang, Ph. D candidate in IIIS, is the first author and the corresponding authors are a former post-doc. Dahyun Yum and Tenured Associate Professor Kihwan Kim. 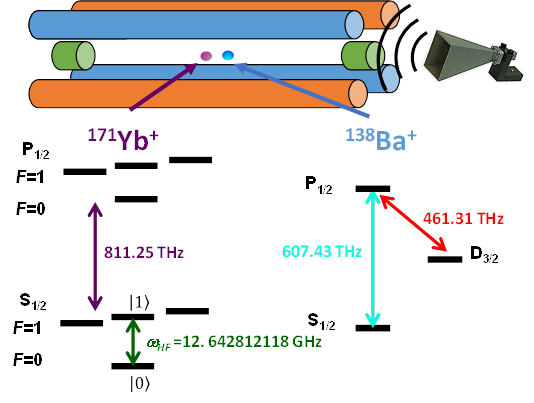 The schematic diagram of the demonstrated trapped-ion quantum memory

The actual quantum information processing is fundamentally based on the technology of coherent manipulation and detection of the basic unit, the qubit. Without the full accessibility to individual qubits, it is fundamentally inconceivable to store, operate and retrieve a quantum information. It has been a long quest to develop technologies to coherently process and detect a quantum information in a single qubit level. Here we report the coherence of over 10-minutes in a single-qubit system, which is an order of magnitude longer than the previous world record. Actually, similar coherence times in the ensemble of trapped ions were reported more than 20 years ago and even longer coherence times in the ensemble of solid state system were reported recently. We have brought the long coherence time seen in the ensemble to the single qubit level, a single ion.

The coherence time of a single ion is mainly limited by the reduction of state-discrimination efficiency from the heating of the qubit ion without any laser cooling. In the experimental demonstration, the problem is resolved by the sympathetic cooling, where the 138Ba+ ion is used as the cooling ion for the qubit ion of 171Yb+ ion. The 138 Ba+ ion is chosen for the cooling ion, since the mass is similar to that of qubit ion while the wave-length for the cooling ion is far from that for the qubit ion, which does not influence on the coherence of qubit ion. Then thousands of dynamical decoupling pulses were applied to extend the coherence time in the influence of magnetic field fluctuation with the gate fidelity of 99.99%. Finally, the coherence times of the single-qubit memory with six different initial states were measured. As shown in Fig. 2, for states 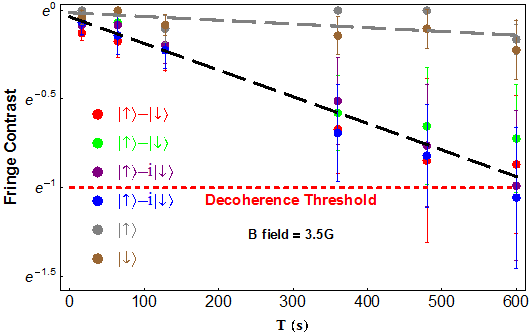 The full paper is available at：https://www.nature.com/articles/s41566-017-0007-1.epdf?author_access_token=Wue794TclIZq1RJz-cRuIdRgN0jAjWel9jnR3ZoTv0Oa-alZStUfdQeyVj4caj8YvMkAbOdPoGeSrXjLswho3ZSnRz-o8P2LWrnBVDHW5-Zts3Sr3LI8T2wiL1VDac2Fn9O1hhFI7LpG8wXMFFmH4w%3D%3D